From ecology
Jump to: navigation, search

BirdView is an interactive web-browser embedded application that allows users to look at gps tracks from the database, superimposing them of different data sources, such as satellite images and meteorological data. It is built using the Google Earth browser plugin, which enables it to make use of all the Google earth GIS functionality (pan, zoom, high quality satellite images, etc), and combine it with the ease of a web browser.

This service is currently not available.

To be able to use BirdView, there are a couple of requirements. Most of these requirements are usually already fulfilled, or in case of installing Google Earth browser plugin, very easy.

We recommend Firefox as browser: While other browser will work too, only Firefox support loading of local KMZ/KML files.

Screenshot of the BirdView Control interface

In the BirdView tab you can find most of the interface controls for selecting the data in the database. It allows you to specify the date and time your interested in, the radar beams you want to include in your queries, the bounding box for the meteorological data, and allows you to switch part of the visualization off and on as desired. Below we go into more detail on different parts of the interface.

The topmost 3 fields, named "Date/Time", "Minutes" and "Animation", and their related buttons, are used to navigate trough time, and enable the user to quickly and easily find periods of interest, such as heavy migration.

When BirdView is started, the date and time default to UTC, rounded down to the hour. UTC is used, because the data in the database uses UTC timestamps, and by using UTC we avoid confusion as to timezones and daylight savings.

To navigate trough time, there are two options:

note: Radar is only enabled for certain users.

Currently there are three different MPR radars (Glons, Wier and Millingen) in the database, that each have both a high beam and a low beam, making a total of 6 different radar images each update.

Often when you are looking at the MPR data you only want a few of the radar images available. Therefore each radar (both low and high beam) can be selected individually. This limits the amount of information on your screen, giving a better overview. Furthermore, it reduces the loading strain, since only the data of the selected radars is retrieved from the database.

The radar selection is used for the following visualization options:

The database contains a large collection of meteorological data, including wind speed, temperature and precipitation, for an area covering Scandinavia to North Africa. For looking at continental migration, this data can be an invaluable asset, but it also puts a strain on the database, since loading large areas can result in longer loading times. If you are only interested in the weather in the Benelux, the long loading time is unnecessary. Therefore we provide an interface to specify the area of interest. In this interface the user can set a bounding box by providing the minimum and maximum latitude and longitude coordinates. This way, only the meteorological data inside this area is queried and displayed.

In some cases the meteorological data also has different values at different pressure levels in the atmosphere. For example, on lower pressure levels (i.e. higher in the air) the wind direction and speed can be significantly different compared to closer to the ground. Since birds can fly on different heights, this is can be an important factor when looking at bird migration.

These settings are used for : 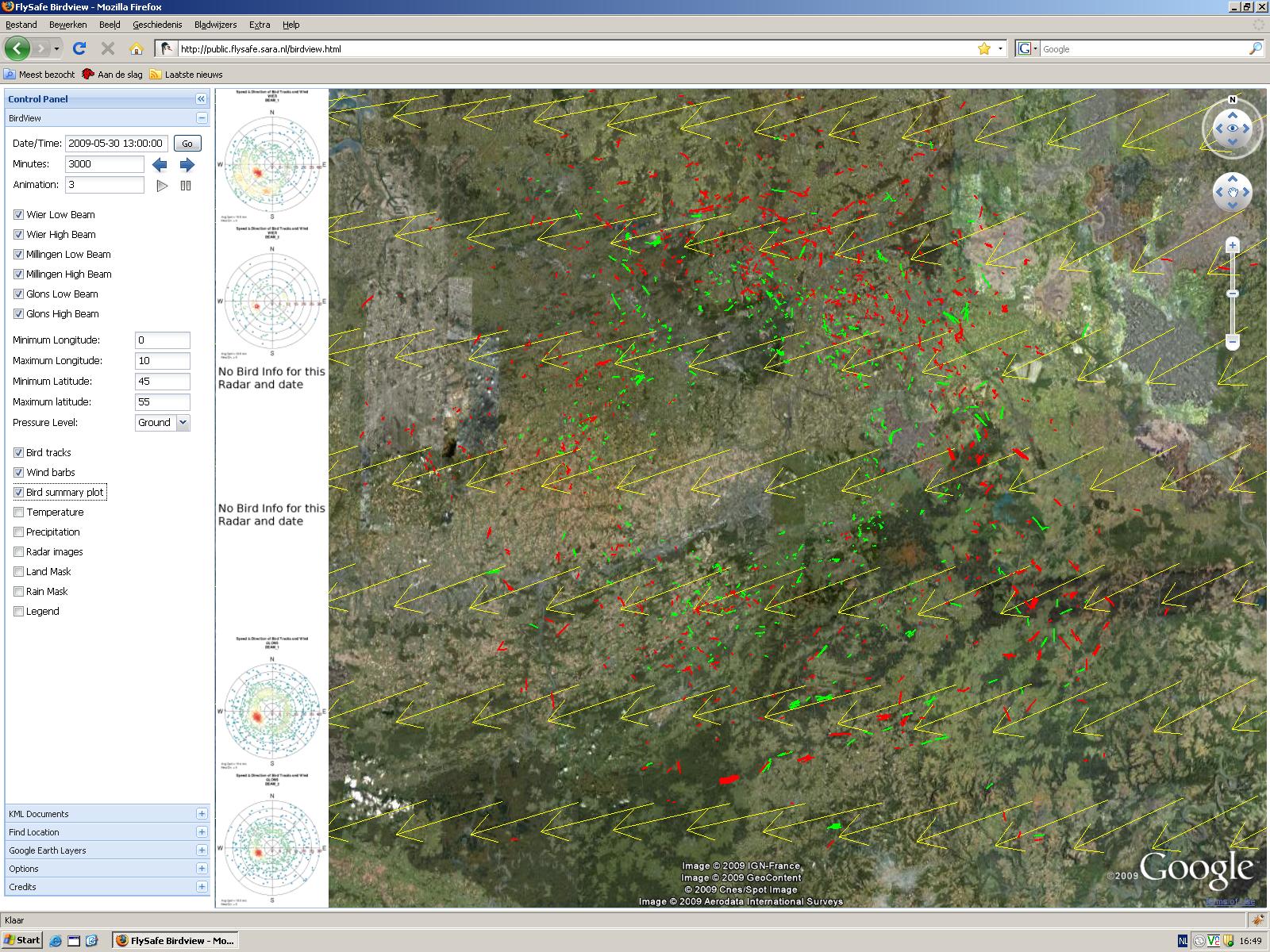 Screenshot of BirdView with summary plots of 6 selected radars

There is no full temporal coverage for the MPR data in the FlySafe database. Out of every half hour, 10 consecutive radar revolutions are taken. Therefor the default time step in BirdView is set to 30 minutes.

The MPR radar data contains a large amount of echoes, of which only a smalls set are bird echoes. In order to extract the echoes that are considered to be birds, an algorithm (ROBIN) is used. The algorithm extracts bird echoes, and then connects the echoes that it considers the same bird, resulting on small bird tracks of up to 10 different points.

The bird tracks give an indication of the amount of birds detected by the MPR radar, but not of other characteristics, such as average speed and heading for each track. In order to give an indication of these factors, a dynamically generated bird summary plot can be shown. In this plot, the average speed and direction of each bird track (taken from the entire radar area for a given beam) are plotted on a circular graph. The angular component is the average flight direction, the radial component is the average speed, and the color indicates the density of tracks in the plot exhibiting a particular combination of speed and direction.

The plot itself is dynamically generated by a separate R (http://www.r-project.org) process, which can run preloaded R scripts. In this case, a bird summary plot is generated that gives a general indication of the direction and speed of bird migration. It is also possible to write other R scripts that generate different kinds of plots. This still requires some rewriting of code, but is a relatively simple operation, and could be something for future extensions of BirdView.

If multiple radars or beams are selected, a unique plot for each radar and beam combination is generated. BirdView displays all the generated plots along the left of the Google Earth window (see figure on the right), stacked under one other, in the same order as the radars appear in the radar selection. If the total height of the plots is bigger than the height of the window, the images are automatically resized so that they fit.

Note: If data for the selected radar has not been uploaded for the selected time period, there are no bird tracks with which to produce a plot. In that case a default image (a large red "X") is shown in place of the plot.

Note: Viewing MPR images requires access Every half hour, 10 radar revolutions are recorded, and the resulting echo densities are added together and stored as an image. In this image, we can distinguish different types of echoes, such as permanent landmarks, rainclouds, and birds. Since we are mainly interested in the birds echoes, we want to be able to distinguish between different type of echoes. This is done by apply certain filters on the echo density image, forming seperate images. There are currently two type of filters in the FlySafe database, in addition to the unfiltered radar image, namely the Land mask and Rain mask. However it must be noted that echoes filtered by either the land or rain masks are not per definition land or rain, but only echoes fulfilling certain filtering criteria.

Each of the different type of images can be added in BirdView as an overlay, centered on the location of the radar. These layers can be turned on and off individually, in order to look at different details of the radar image. Furthermore, each of the overlays is partly transparent where there are no echoes, in order to be able to see how the radar image relates to the real-world satellite images.

When adding the overlays, they are always added in the following order, bottom to top: 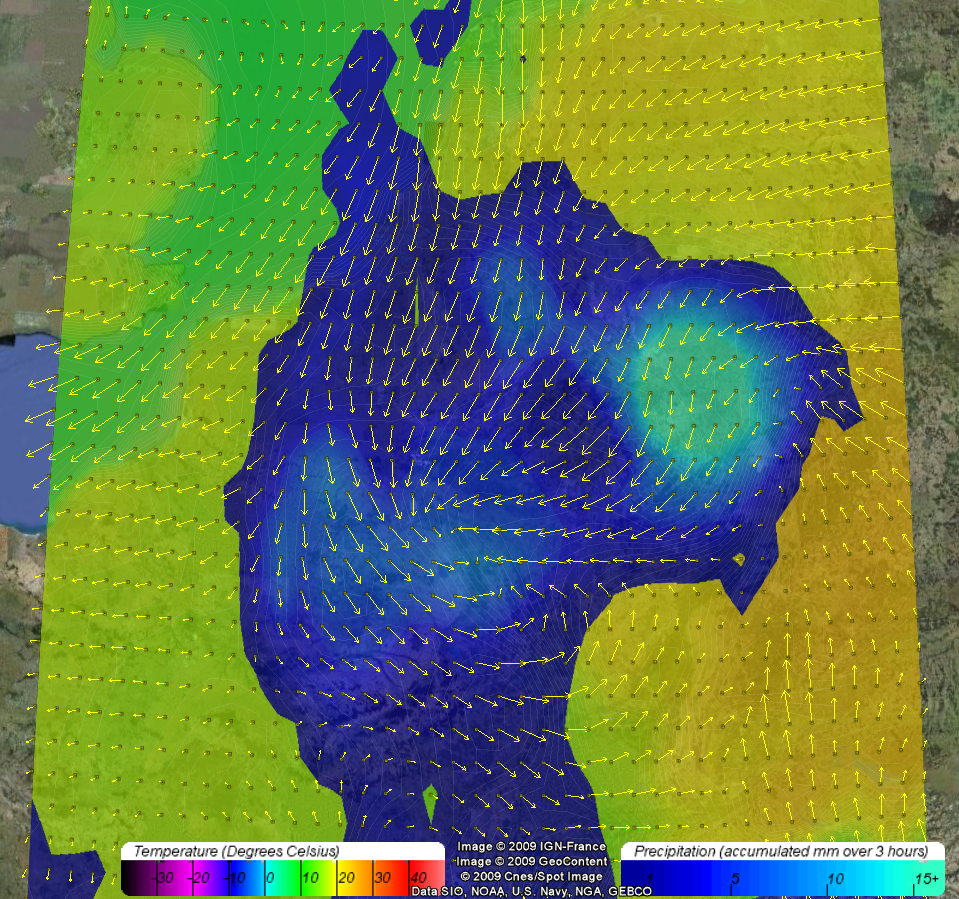 The FlySafe database contains the weather prediction data acquired from ECMWF. The meteorological data goes back as far as 01-01-2005, although only wind vector is available for that particular period.

By selecting the temperature option, you get the temperature as a slightly transparent filled contour plot, in an area bounded by the bounding box. The temperature range displayed is limited to a -40 to 50 degrees Celsius range, with a small jump at the freezing point, making it stand out slightly. The legend of the temperature can be found by using the legend option.

Wind speed is an important factor in bird behavior. Flying against a strong wind is very inefficient, while flying along with the wind can save a lot of energy. It can often be seen that the general direction of birds is strongly dependent on the wind speed.

If the wind Vector option can be used to visualize the wind speed. It will display the wind in yellow arrows (vectors) where the direction is the wind direction, and the size of the arrow gives an indication of the wind speed.

When the legend option is checked, the wind vectors will be extended with very small icons on the base of the arrow. These icons can be clicked on, and a popup table will tell you the exact properties of the wind vector in that location, with speed in both U/V component, and in absolute speed/heading.

The precipitation is visualized as a slightly transparent filled contour plot, in an area bounded by the bounding box. Everything under 1mm of precipitation is ignored, the rest is shown in a scale of dark blue to light blue. The range goes to 15+ mm, everything higher gets the same color as the 15mm level.

The precision of the plot is 0.5 mm per color level.

The KML document panel contains the interface to add custom data to BirdView, in the form of KML/KMZ files. These files can be located either on your local machine, in which case you upload them, or they can be retrieved directly form an online location.

Note that while all browsers support loading of online KML/KMZ files, only firefox supports opening local KML and KMZ files.

Here you can add the url of an online KML or KMZ file, and so load it directly in BirdView. Either press "enter" or the little magnifying glass icon.

Note: These are only supported in Firefox

Both the KML and the KMZ options work similar: Press the "browse" button and select the KML or KMZ file you want to upload. The file is then uploaded and opened in BirdView. Depending on the size of the file, this might take a short while.

The tabs "Find location", "Google Earth Layers" and "Options" provide some of additional functionality that is usually found in Google earth. The functions and options function similar as a normal Google earth/Google maps client.

In this overview tab the main partners in the FlySafe Project are listed as images. Each image is a link to the organizations website, and a mouse-over shows the name of the partner.

Furthermore, there is a checkbox that switches on the logo-icons in the Google earth plugin. These icons show the location of the the partners on the map. The logo-icons are visible when you start BirdView, but are turned off automatically after 10 seconds.

The security of the UvA-Bits database is an important issue, and as such there are a few security measures in place to protect both the data in the database, and the system itself.

The BirdView application itself is open to the public, and can be accessed by anyone. However, to access any kind of data from the database, a user is required to log in using her UvA Bits username and password.

Some functionality, such as the ECMWF data and the radar images, require additional access rights, and might be disabled for some users.